Tuting is northern most village on the banks of the river Siang, on the Indian side of the Indo-Tibet border. It is truly the end of the road. In March 2018, the Indian Air Force landed their mammoth C-17 Globmaster transport aircraft on the Advance Landing Ground in Tuting. This and another landing in Eastern Ladakh were to demonstrate the ability of Indian Armed Forces to quickly deploy troops in these remote border areas.

Arunachal Pradesh in the North East region of India has always been one of the most elusive in terms of motorcycle adventures. The pristine wilderness, lack of mainstream motorcycle mentions adds to the enigmatic adventure experience.

Eastern Arunachal tops the ranking in terms of remoteness and untouched natural beauty. It is one of the last bastions of the Tribal Way Of Life. These tribal people have lived in harmony with the jungle and are proud of their subsistence life style.

“Menchuka” roughly translates to Medicinal Water of Snow. This beautiful valley is located on the Indo-Tibetan border at an altitude of 6000ft. Till recently it did not have road connection with the reset of India. During the Indo-Sino war of 1962, Menchuka was occupied by the PLA for about a month. It was only after this occupation and subsequent retreat of the Chinese Army, that the people of Menchuka, cut 6km stretch of motorable road along vertical cliff face.

The “Yoksa Ride” is a tribute to the men and women of the “Border roads Organisation” who have endured unimaginable hardships to build these remote roads we will be riding on.

This ride is designed for the Adventurer who is keen on seeing what lies at the end of road. For the Biker who does not feel the need to prove anything to anybody, including himself/herself. A biker who is only interested in exploring corners of the world that nobody talks about, let alone visit.

Red Panda Adventures is one of the few established and well-known motorcycle tour operators in this region, catering to local as well as international riders. We have a local team who know this region well, allowing us to serve you and organize our rides with utmost care and planning.

Pricing is based on twin sharing basis (2 riders, 1 room). For single occupancy (1 rider, 1 room), please email us on trips@redpandaadventures.com

1
Arrive at Dibrugarh
Meet and greet all riders at the airport and shuttle to the hotel. Introduction to the motorcycle and ride briefing followed by a traditional Assamese dinner.
2
Dibrugarh to Aalo
Dibrugarh to Aalo is a 255 kms / 8 hrs ride. We start the ride early so that we can catch the sun raise over the mighty Brahmaputra from on top of the Bogibeel Bridge. After riding for about 2 hours, we will stop for breakfast at a small Mishing tribe dhaba. Soon after the heavy breakfast, we will start climbing up the mountains towards Aalo. The road will largely be good for a brisk ride till we get to Komsing. The 30km from Komsing to Aalo, will put your endurance and patience to test. Consider this as a rite of passage for the paradise that awaits beyond Aalo. Our stay at Aalo will be at a basic but clean resort on the banks of the Siyom River.
3
Aalo to Menchuka
Aalo to Menchuka is a 190km/10 hrs ride. The initial 70km of the road leading out of Aalo is fantastic. After that it’s a proper Adv ride thru narrow mountain roads along the Siyom river gorge all the way up to Menchuka. Breakfast and lunch will be at dhabas on the way. We expect to reach Menchuka by late afternoon. Our stay at Menchuka will be at a traditional, warm home stay.
4
Menchuka day trip
Menchuka day trip: We will spend the day visiting some two historical Buddhist gompas, natural wonders and rope bridges across the river. It’s a day to soak in the local culture, food and listen to the local enchanting folk lore.
5
Menchuka to Aalo
Menchuka to Aalo is a 190km/10 hrs ride. Having ridden over these roads earlier, you would know what to expect and can afford to take your eyes off the road and enjoy the spectacular mountains and streams.
6
Aalo to Yingkiong
Aalo to Yingkiong is a 115km/5 hrs ride. We will ride along the Siyom river for about 45km to Boleng. This is where the Siyom pours in to Siang. The road from Boleng to Yingkiong passes thru dense jungle. Human population becomes sparse as we continue to ride up stream on the right bank of mighty river Siang. Yingkiong is a small town populated largely by the Adi tribe. If we are lucky we can meet Mr. Kishon Tekseng who has climbed Mt. Everest and is currently training local youth to be adventure sports guides. We will be staying at his river side camp.
7
Yingkiong to Tuting
Yingkiong to Tuting is a 151km/8 hrs ride. This road runs along the right bank of the Siang river. The river has cut steep gorges in to the mountains. Once you have experienced these dense jungles with giant trees, everything else in comparison will start to look like a garden. Tuting is the end of this road. We will stay in the only lodge in town. This lodge is owned by a farmer who is also a local high school science teacher.
8
Tuting day trip
Tuting has some very interesting things to see and experience. Our rest day tour of Tuting will be a day in paradise.
9
Tuting to Yingkiong
Tuting to Yingkiong is 151km/8 hrs ride. We will start at first light day, so that we can ride slow and enjoy the sights along the way back to Yingkiong.
10
Yingkiong to Dibrugarh
Yingkiong to Dibrugarh is 280km/7 hrs ride. This ride is on splendid roads with fast winding bends all the way to Pasighat. After that, we will be in the plains and on regular highways till we reach Dibrugarh. At Dibrugarh, we will stay in the same place as on day one
11
Depart from Dibrugarh
We will bid our good byes and drop you off at the airport. As you fly away, you will drift in the memories of the sensory extravaganza of the last week. 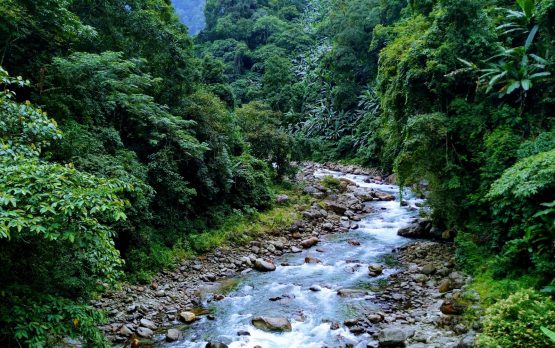 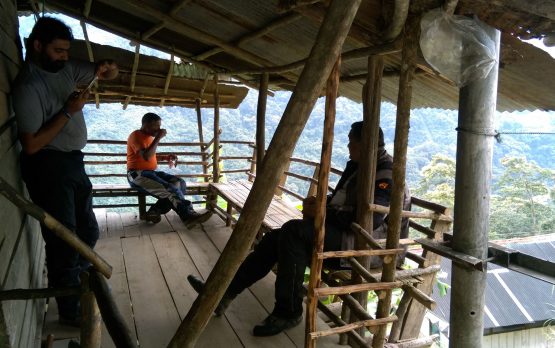 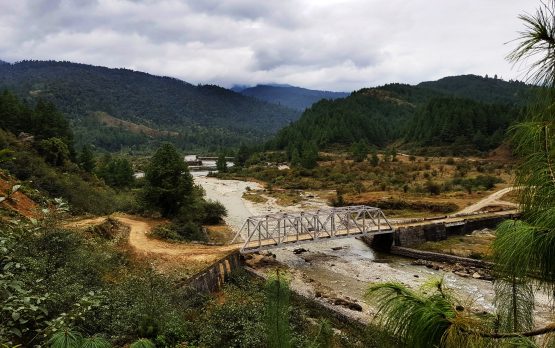 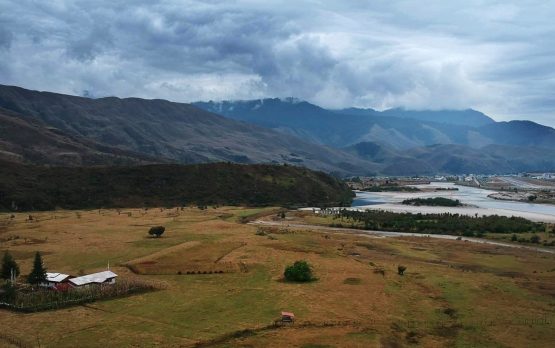 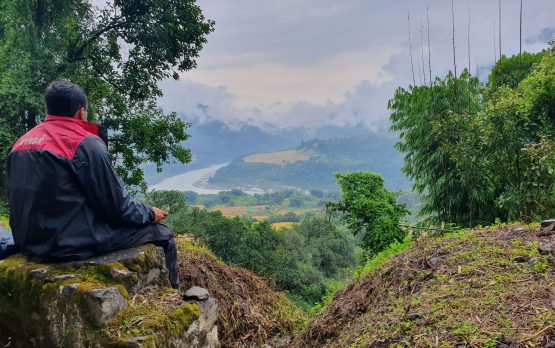 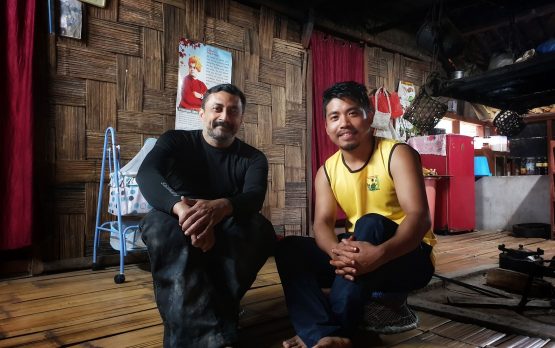 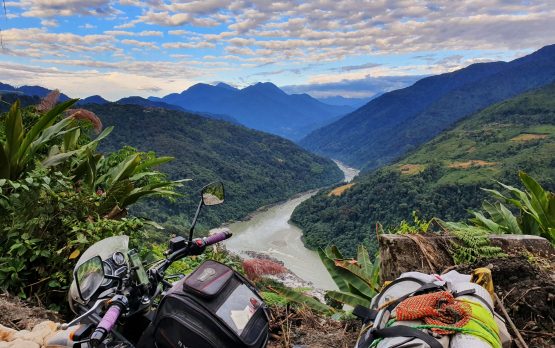 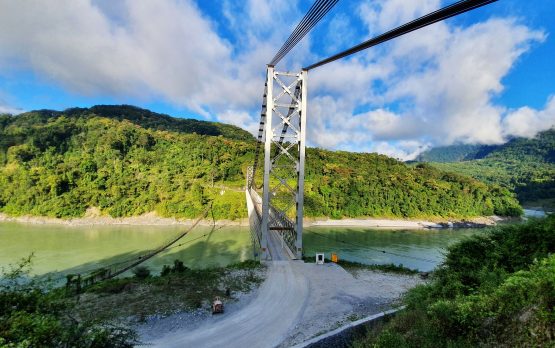 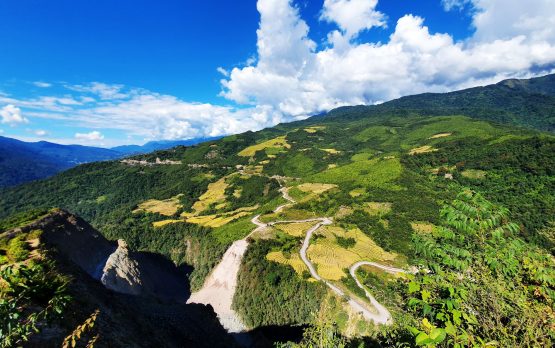 Explore Our Exclusive, Otherworldly Retreats From The Ride.

Riding in the North East is a lot of fun and promises adventure around every bend. Formed over millions of years, the Himalayas and it’s foothills command and deserve respect. We try our best to inform our clients of all the possible challenges they might face and also of all the key highlights and attractions along the way. However, the ultimate responsibility of safety lies with the riders.

This trip is not ideal for someone who has just started riding. The terrain, culture and remoteness may get a bit overwhelming at times, but stay with it to get your adrenaline fix.

We want you to soak in all the wonders this ride has to offer. So the schedule allows for many stops along the way for photographs and chit chat. There are a multitude of ‘chai’ stops along the way but we aim to start and finish the ride each day while the sun is up.

Accommodation and food will be very basic, but we provide the best one can get in these remote tribal villages. We do expect our clients to set their expectations accordingly. Luxury in this part of the world is relative to the terrain and needs a bit of adjusting.

Zanskar monasteries ride was a ride that is now permanently itched in memory, a very well curated route with some amazing sights, experiences and connect with the history that is untouched by modern tourism.. highly recommend Red Panda for curated riding experiences .. thank you Balaji :)

Had a life Changing experience in the monasteries of zanskar ride With red panda. One of a kind extreme travel company this is